Historically harvested as an important source of food and medicine, the versatile blueberry has since gained newfound popularity as an antioxidant-rich superfood. Lest you think the blueberry business grinds to a halt come cooler temperatures, we are sharing one farmer’s practices in the autumn and winter that help lead to a fruitful harvest the following season.

Having founded Wilmot Orchards in 1976, Charles Stevens knows a thing or two about berry growing. In 1979, he planted his first highbush blueberries and now, his picturesque berry farm spans 25 acres near Newcastle, Ontario, alongside his 120-acre apple orchard. With blueberries notoriously tough to grow—only a fraction of Ontario land is suitable for growing them—proper maintenance and care are essential to maximizing productivity, even past the picking season.

“Blueberries like two main things: acid soil and organic matter,” says Stevens, whose operation now grows nine varieties of the relatively low-maintenance berry. “Growing a crop is all about minimizing those nasty effects from Mother Nature, whether it’s too dry, too cold or too hot.”

To that end, Stevens employs a few techniques to ensure his blueberry bushes are prepared to handle the often-harsh Canadian weather. One of the primary tools in his arsenal? Sawdust, which is added to established plants in the autumn.

“When sawdust breaks down in the ground, it acidifies the soil, adds organic matter and protects the roots during the winter, especially if we have a winter without much snow,” says Stevens, who runs Wilmot Orchards alongside his wife Judi and daughter Courtney.

As a result of the sawdust application and the nature of the blueberry plant, Stevens uses very little fertilizer on the plants. “The organic matter actually supplies a lot of the nutrients,” he says. “Growing blueberries is of huge benefit to the soil because you don’t need to work the soil—all of the prunings, clippings and berries go back into the soil and enhance it. The berries almost feed themselves.” 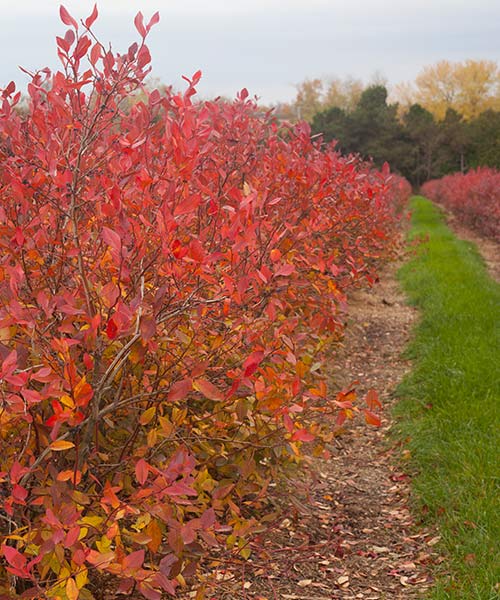 At Wilmot Orchards, sawdust is used to ensure blueberry bushes are prepared to handle Canada’s harsh winter weather. Added to the established plants in the autumn, the sawdust breaks down and acidifies the soil, adds organic matter and protects the roots during winter.

As the growth cycle of the plant is such that it sets the buds for the following season’s crop in the autumn, proper moisture is especially key at that time to ensure sufficient growth in the spring. Trickle irrigation techniques are used throughout the growing season, with water in the underground irrigation system blown out in the autumn to ensure trapped water does not freeze and cause the pipes to burst. The addition of the sawdust helps to retain the moisture in the soil.

“Every one per cent of organic matter in your soil holds one inch of rain, so if you have three per cent organic matter and don’t see any rain for weeks, you’ll have sufficient moisture for a while,” says Stevens, who is also a board director with the Ontario Fruit and Vegetable Growers’ Association, and chair of the Crop, Plant Protection and Environment Committee at the Canadian Horticultural Council.

In the autumn after each harvest, Stevens also puts down a slow-releasing, natural agri-sulphur to keep the soil’s pH level down to an ideal range of 4.5 to 5.5.

“You cannot grow blueberries if the pH is higher than 6.5,” he stresses. “When we add the agri-sulphur, it lowers the pH and offers micro-nutrients that are released into the plants.”

Micro-nutrients sprayed onto the leaves also prevent the bushes from freezing, acting as a sort of “anti-freeze” that can be absorbed into the leaves and bark.

“The bushes will dry out or die if there is an inadequate amount of those nutrients,” says Stevens. “It’s been very beneficial to our operation and has increased the yield significantly.”

As an added defense, Stevens brings in frost fans to further protect the berries from the cold. The temperature-sensitive fans automatically turn on at a certain temperature and then turn off when it gets warm enough.

“Without them, you can lose a whole crop in three hours,” he says.

These tools and techniques assist Wilmot Orchards in making the most of the off-season so the bushes are ready for their annual pruning in the spring, a process that is completed by hand.

“We don’t touch the bushes until the weather gets warmer,” says Stevens. “Pruning keeps them young and vibrant because as we know, in nature, young means better productivity.”

Throughout the year, Stevens uses minimal crop protection materials to protect against pests and weeds. The sawdust applied in the autumn acts as an artificial herbicide, breaking down slowly to smother pesky weeds.

“We also have to spray minimally because of an invasive insect species (Spotted-wing Drosophila) brought in from Asia that has no natural predators in Canada,” he notes. “It lays its larvae inside the berry, which makes the berry go mushy and unsellable. It’s not the kind of protein people want in their fruit. It has really changed our industry in Canada.” 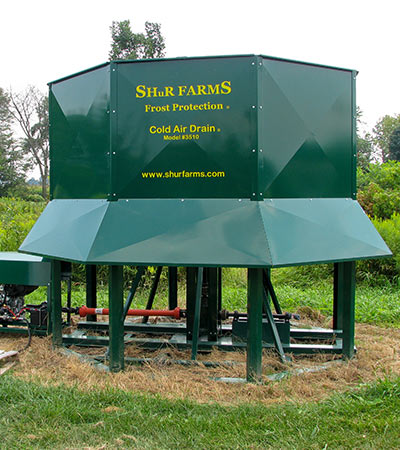 Wilmot Orchards brings in frost fans to help protect the berries from the cold.

Wilmot Orchards’ only other form of pest control comes courtesy of trained predatory birds, like hawks and peregrine falcons, which are brought in each summer to scare smaller birds away from eating the berries.

“It’s nature against nature,” Stevens laughs. “We’ve been bringing in birds for more than 20 years to reduce berry loss.”

Much like the birds, the public’s appetite for the berry shows no signs of waning. Blueberry season typically starts in late July and peaks in August, with thousands of visitors flocking to Wilmot Orchards to pick baskets full of the sweet treat. Thanks to the different varieties ripening throughout the summer, the picking season is extended by several weeks.

“Without multiple strains of blueberries, our season would be cut in half,” says Stevens.

Making the time to properly care for his crops year-round leads to strong, healthy plants that will continue to produce berries for decades to come.

“Blueberry production really is a long-term production. It usually takes, in Ontario climates and land, about eight to 10 years to get up to production,” he says. “If you take proper care of the plants, they can be around for decades, easily.”

Though winters mark a bit of a “downtime” for Stevens, he still remains busy with tasks like succession planning and supply ordering.

“As far as supply ordering, in the winter, you want to address the changes you would like to make in your nutrient management or crop protection strategy going into the new year. These can be addressed in the winter when you have time to think about it,” he says.

“In terms of succession planning, I’m at an age where the majority of farmers in Canada will pass their operation on to the next generation or sell their properties,” he continues. “I spend a lot of time [succession planning], which is worthwhile when you’ve spent 40 years of your life building an operation.” 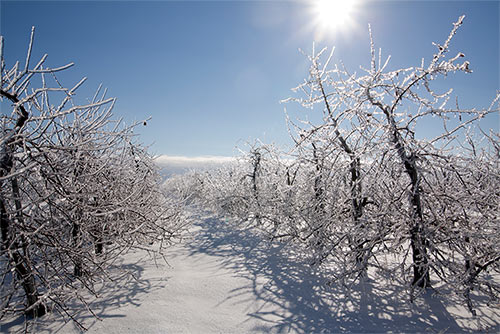 Growing a crop like these highbush blueberries at Wilmot Orchards near Newcastle, Ontario, is all about minimizing the nasty effects of Mother Nature.

When it comes to making the most of the off-season, Stevens encourages fellow growers to become involved with their local associations, no matter what they grow.

“When you’re a grower, there are so many resources that allow you to get involved and go to meetings—you can always talk to someone who may give you an idea that could enhance your operation,” he says. “All it takes is one idea that you bring back—it could be about irrigation or labour management or crop protection or your marketplace— that could enhance it. Talking to someone who has done it has far greater value than just finding information on the internet.”