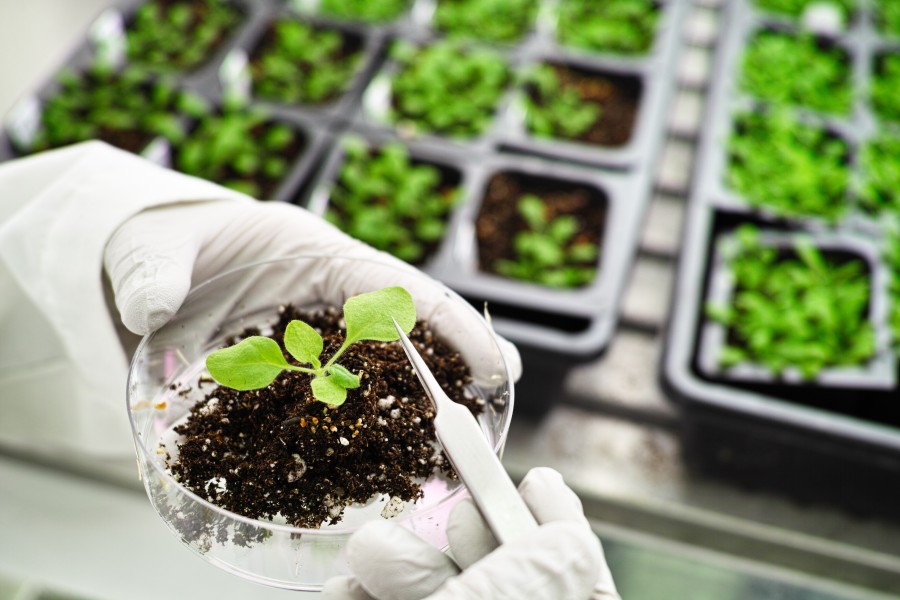 Every Canadian engages in conversation over food, but how many of the conversations are actually about food? As fewer people work in the agricultural industry or live in or near farming communities, many consumers have no connection to where their food originates. This demographic shift has led to a loss of understanding of the methods used to improve crop or animal genetics.

The term GMO (genetically modified organism) is an apt descriptor of what scientists have been doing for centuries to create better food sources with plant breeding. Modifying rapeseed into canola is a classic example of genetic modification. Unfortunately, the acronym GMO has been hijacked in recent decades creating a negative connotation, particularly in reference to plants resistant to disease and pests or which can tolerate crop protection products offering farmers better weed or pest control options.

“I think the story of GMOs has been stolen from those of us who work in agriculture,” says Nadine Sisk, vice-president of Communications at CropLife Canada. “Our food in Canada is safe and we need to share our story. We can help consumers understand how modern agriculture works and how it’s better than how we used to do it.”

National polling firm Ipsos is engaged periodically to poll consumers regarding their perception of food. In the most recent poll in August 2015, paid for by the Canadian Biotechnology Action Network, six in ten Canadians oppose genetic modification to improve food. The questions put to 1000 Canadians showed 57 per cent lack confidence in government safety and regulatory systems and a whopping 88 per cent believe that mandatory labelling of GM foods is needed.

“Our poll did not indicate whether people have enough information to make informed decisions,” says Sean Simpson, vice-president of Ipsos Public Affairs. “Our results are more attitudinal as opposed to behavioural and the strongest sentiment that came out was based around knowledge [of GMOs].”

Meanwhile, polling done by CropLife Canada indicates that at least one third of Canadians are comfortable with GMOs. Sisk says CropLife Canada polled people in 2010 and 2013 regarding attitudes to GMOs and saw a positive up-tick in public comfort with GMOs from one poll to the next.

“We grow good food,” says Sisk. “Our industry didn’t do a good job telling consumers about GMOs initially, which allowed someone else to tell the story for us and it wasn’t done accurately.”

Sisk suggests that all sectors of agriculture need to work together to share stories to multiply “our voice”. With only two per cent of the Canadian population actually working on farms and only one in eight jobs related to agriculture, it is easy to see how a greater majority developed a dialogue around an issue that only a small minority fully understands.

Shawn Troyer is committed to her family eating healthy food. Living in an urban area in Ontario surrounded by some of the best farmland in the province, she is suspicious of GMOs believing they are the product of large multinationals that are geared towards making money. She thinks many people don’t know what GMOs are and that concerns her. To get information, Troyer relies on the internet.

“I understand there are more people in the world and we need more food, but is what we are doing making better food or just more of it?” Troyer comments.

Troyer feels there is little independent research believing big companies with a vested interest are financing the research. She would like to see an independent study that compares all modified forms, both traditional and biotech, of an agricultural product to show if it is the same or not. That is research she believes she would “trust”.

Sisk admits a poor job was done initially to educate consumers and now agriculture needs “to focus on why plant biotechnology is so important to modern agriculture.”

There has been an explosion of information on GMOs aided by the internet, but there is no way to control the message. Consumers seeking information need to find legitimate sites with solid information, such as “GM food myths” published by AgBioWorld.org or the reasoned answers that can be found at GMOanswers.com. Both sites offer science-based responses to consumers’ questions.

In the end, Sisk believes there are three distinct groups of consumers – those who accept GMOs, those who reject GMOs and cannot be convinced otherwise, and a larger middle group that don’t think GMOs are bad, but who want more information. “There’s a distinction between ‘for’ or ‘against’ versus ‘I’m not sure’,” she says. “This is where we need to focus our attention and talk to people who are not entrenched in their point of view.”

The ability to improve food is vital to human kind as it ensures health and abundance in an effective manner. The local food movement, for example, wants food variety, nutrition and availability, which is difficult in Canada where growing seasons are short and storage can be a challenge.  Despite genetic modification being the basis of all plant breeding and animal genetic improvement, consumer distrust ballooned with the advent of biotechnology. Food is a basic human need and the ability to improve upon it using science makes the conversation over dinner either fraught with suspicion or filled with excitement. Those who work in agriculture need to invite consumers to the table.